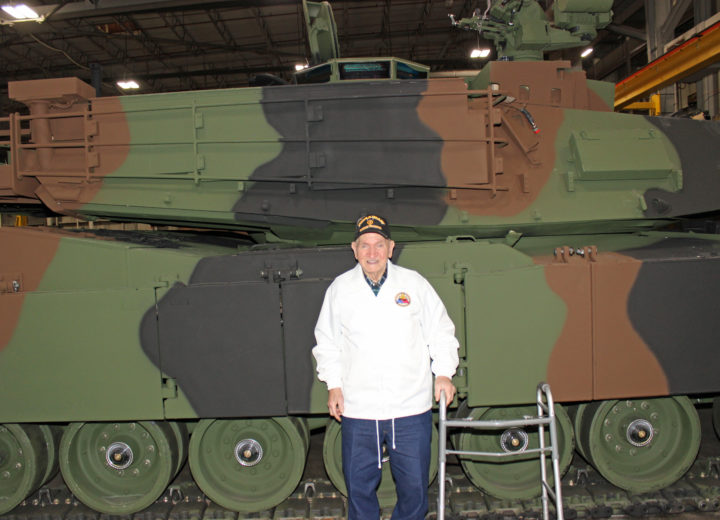 The Joint Systems Manufacturing Center in Lima rarely opens its doors to the public. As the last remaining tank manufacturer in the United States, the facility is high on security and low on willingness to provide guided tours. But they were eager to welcome 95-year-old Albert Holman, a decorated tank battalion commander in Newark who served in World War II.

Veterans have sometimes visited the plant before, including “tankers” who served in the Persian Gulf War. But Holman’s military experience is rare, especially in 2019. He was a member of the 12th Army Division (“The Hellcats”) that was asked by General George Patton to lead the way for his Third Army to cross the Rhine River in March 1945. It was a key moment of World War II as it began the Allied forces invasion of Germany.

Holman was given an insider’s look at the 78-year-old tank plant, including a demonstration of the latest vehicles and a full presentation about the history of U.S. battle tanks and the Lima facility, which is powered by AEP Ohio.

“People at the plant were pretty excited about his credentials,” said Customer Account Manager Jim Bifulco, who works with the plant on behalf of AEP Ohio. “When we were riding around you could see workers stop what they were doing and come down to watch. You could sense the excitement. Just to have him there was a pretty big deal.”

The excitement was mutual. Holman’s grandson Tyler Stockdale is a meter electrician for AEP Ohio and said his grandpa was over the moon the moment he was presented with the opportunity to visit.

“That’s kind of his life. He loved tanks. Still does,” Stockdale said. “He loves talking about his military ranks and his missions. He’s proud. I was very happy for him.”

Holman’s guides ate up his war stories about serving with General Patton. The tour included stops at various stages of tank assembly and Holman had a tale to accompany every one. He drove a Sherman tank during World War II and was quick to point it out when it was pictured during the slide presentation.

“He had a grin from ear to ear,” Stockdale said. “Didn’t stop till we got home, three hours later. He was on cloud nine for many days after.”

Holman was fond of the gift shop, too, and he left with a T-shirt, decal and tank poster. He immediately wanted a frame for his poster and within 24 hours or so it was on the wall – near his favorite chair amidst a wall of tank memorabilia.

“He was like a little kid the whole time. He’s still talking about it to this day,” Stockdale said. “It’s probably one of his most favorite things he’s ever done.”