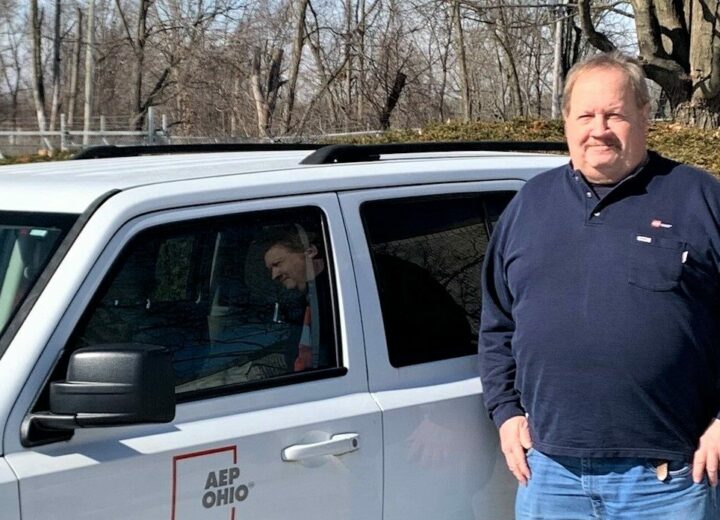 Tommy Schafer Spotted a Girl Hidden Behind His Truck. 42 Years of Experience Helped

Tommy Schafer has been a lineman for so long that many of the safe behaviors he practices are practically second nature. For Schafer, prioritizing safety is just as important today as it was 42 years ago when he started at AEP Ohio – and continuing to stress its importance may have recently saved a young girl from getting seriously injured.

On the morning of Tuesday, November 30, Schafer, a line crew supervisor in southeast Columbus, was responding to a call from an apartment complex in Pataskala. One of its employees had called to report equipment on the property that wasn’t properly closed and locked – a public safety hazard.

After completing the job, Schafer was returning to his vehicle when he saw that a delivery truck had parked no more than three feet in front of his vehicle. Schafer knew he would have to back up to leave and – as he always does – began scanning the area around his truck to look for any hazards. He didn’t see any.

Schafer began his “Circle for Safety,” a safety check that requires employees to completely walk around the vehicle looking for hazards (both around and under it) before pulling away. During that check he was startled to find, nearly hidden behind the driver’s side tire, a 4-year-old girl crouched down on her knee to repair a broken wire on her electric scooter.

“It happened that quick. Had I got in the driver’s seat and started backing up, even though I have a rear-view camera, I don’t think I would have seen her in time,” he said.

Schafer helped the little girl restore power to her scooter, and then located the girl’s mother to keep watch so he could drive away safely.

According to Schafer, he has been performing a Circle for Safety for decades, and for good reason: He says he regularly finds children playing around his vehicle, particularly around apartment complexes and during the summer months when kids are often out and about. (He says young boys are especially fond of hopping into the bed of his truck when they shoudn’t … his grandson included.)

“It’s a natural habit now,” Schafer said. “In fact, sometimes you have to do a second walkaround, like if you’ve been sitting there for a while on a phone call or something. There are times I’ve gotten back out because you don’t know what might be there now.”

The Circle of Safety is a core driving principle employees perform for keeping people safe. According to Chris Echard, an AEP Ohio safety and health consultant, this incident illustrates perfectly why the practice is so important.

“This brings to light the exact reason we complete a Circle for Safety,” Echard said. “Zero Harm is a commitment to our own personal safety, the safety of our coworkers, the safety of our friends and family, and the safety of the public. This commitment is demonstrated by the choices we make and the actions we take when we see something wrong. This was a great job by Tommy, because he may have saved that girl from getting hurt.”

2 responses to “Tommy Schafer Spotted a Girl Hidden Behind His Truck. 42 Years of Experience Helped”