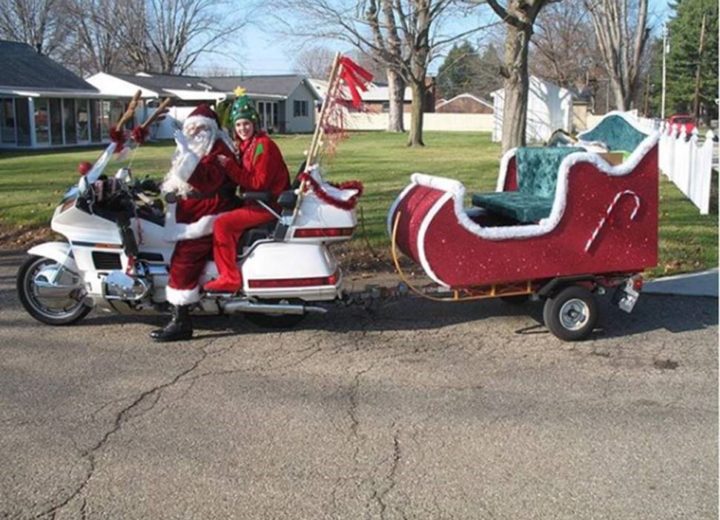 Spotting Santa and his sleigh is tricky, especially if it’s not Christmas Eve. But here’s an inside tip: he’s been regularly cruising the streets of New Philadelphia since Thanksgiving, and kids lucky enough to spot him will come away with a toy, too.

April Leighliter, an AEP Ohio meter clerk in Gahanna (and one of Santa’s elves), says she and her dad started this holiday tradition nine years ago. Once Thanksgiving arrives the pair hit the road, crisscrossing the New Philadelphia area on motorcycle for four to five hours every day until December 23 (weather permitting). Whenever they spot children playing, out comes Santa’s sack: he doles out footballs, baseballs, baby dolls, coloring books, crayons, stuffed animals, yo-yos … all kinds of goodies.

“I think at first Dad just wanted an excuse to ride his motorcycle,” April says with a laugh. “But then he wanted to do more with the community.”

April’s dad, a retired factory worker, upped the spectacle in 2013 when he built the sleigh that’s pulled behind the motorcycle. It’s perfect for hauling toys, makes a great spot for photo-ops and is a sight to see for passing cars.

“People just love it. They ask to take pictures with it, with their kids and their family and even their dogs, too,” April says. “When we stop to get gas people will always come up to talk with us.”

The duo save money throughout the year to buy almost all the toys themselves, though they do get help from their family and a handful of toy donations come in throughout the year. Some local stores also pitch in by giving Santa a special discount.

The daily riding is a big commitment but it’s a labor of love that April and her dad have no intention of stopping any time soon … at least, not until all of Santa’s deliveries are made. (After all, he can rest at the North Pole in January.)