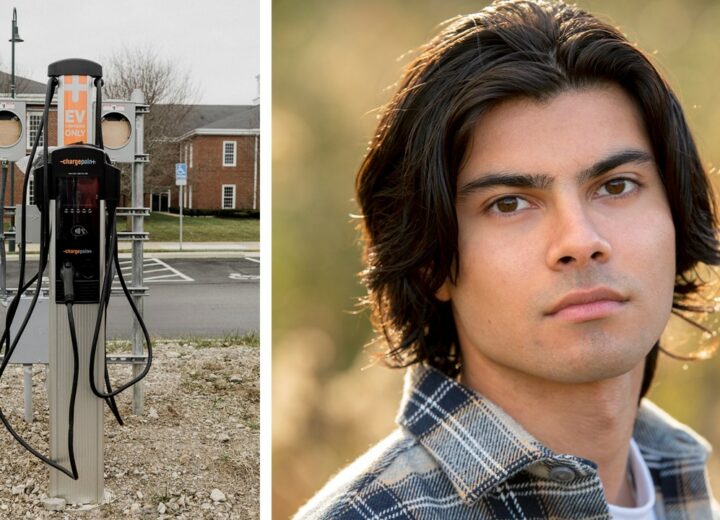 Jay Painter is a senior at New Albany High School. He’s always loved cars: He played with Hot Wheels as a kid; he watches Formula One racing; he went to automotive engineering camp at The Ohio State University. So when it came time to pick a Senior Seminar and Global Scholars project for his final year – and possibly combine his dual passions for cars and better stewardship of our planet – the choice became clear to him: helping promote electric vehicles.

Consulting with his family and Kenneth Kraemer, his school principal, Painter landed on four primary goals for his program:

“I wanted to do my part in protecting the environment,” Painter said. “And, hopefully, influence electric vehicle purchases throughout my community.”

Though Painter has been involved for three years in a Global Scholars program that encourages students to tackle global issues by taking action locally, that real-world momentum didn’t truly begin until February 2021 when he began the first phases of his effort. It was during his research on other EV charging stations that he learned about what AEP Ohio has been doing around a similar purpose.

The missions matched. Painter – working in collaboration with New Albany Schools and the City of New Albany – submitted pre-application forms to AEP Ohio to verify his eligibility, describe the planned project and provide estimated costs. Once Painter filed the documents the waiting game was brief: His proposal was accepted.

About 12 months later, thanks to Painter’s dogged efforts around logistics and construction, power is now flowing to a “Level 2” charger – with ports for two vehicles – outside the McCoy Center for the Arts and Charleen & Charles Hinson Amphitheater on East Dublin Granville Road. (The station is one of 375 AEP Ohio has installed in the past few years.) Located a few hundred yards from New Albany High School, the charging station was a little more difficult to bring to life than Painter expected but is tangible proof of his hard work (“and I like to challenge myself,” he said).

Painter still has some work to do on his project … and on defeating global climate change, of course. In the meantime, he’s been working on achieving a couple other big goals: going to college and acquiring his dream car.

Mission accomplished for the first, as Painter starts at Ohio State’s business school in the fall. As for the second, a big problem lies in the sky-high price tag of the Audi e-tron GT. Just how high? “I haven’t looked. Because I don’t really want to look,” he said.

Then again, we know how Painter fares with a good challenge.