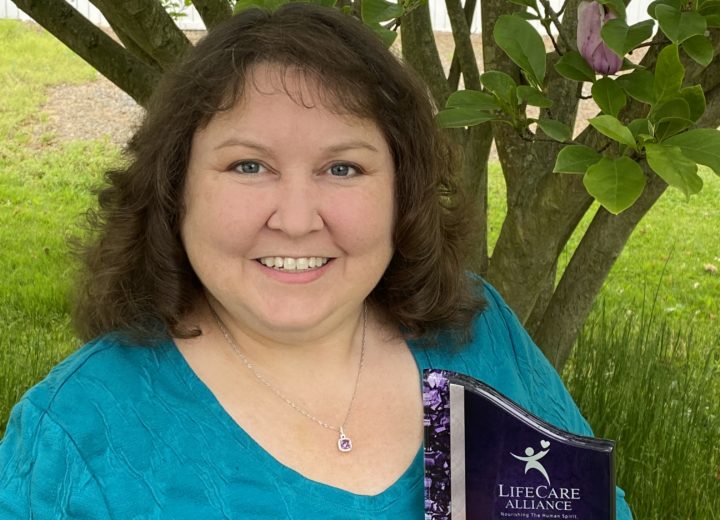 Hill Honored for 16-Year Commitment to Meals on Wheels

Hill’s career at AEP began at the General James M. Gavin power plant in Cheshire, Ohio, where her dad was a welder for 36 years. Hill interned there in summers during college and returned 10 years later for a job in 2001. She came to AEP Ohio in 2004, joining a team that worked with the Public Utilities Commission of Ohio on customer complaints, boundary changes and other regulatory issues.

Hill played an instrumental role in the effort to get AEP involved with the Meals on Wheels program in Columbus. At that time AEP Ohio’s regulatory and external affairs groups operated out of the Key Bank Building downtown, and Hill took the lead on organizing a delivery route out of 1 Riverside Plaza, AEP’s corporate headquarters.

AEP Ohio’s move to Gahanna expanded the operation. In 2021, AEP employees perform four routes in the Columbus area: two out of 1 Riverside Plaza, one in the Arena District and one more in Gahanna. (For a short time there was also a route in Groveport.) As many as 100 employees were involved in the Meals on Wheels program at its height, with employees typically spending one or two lunchtime hours each month delivering nutritious meals to elderly recipients in need. In 2019, for example, AEP completed 312 deliveries of about 20 meals each, adding up to more than 6,200 meals served.

Hill delivered to many of the same people over the years and got to know several of them very well. She saw the beneficial impact of her work and enjoyed her brief breaks outside the office, too.

“Older folks don’t always get much recognition,” Hill said. “This program helps them stay in their homes as long as they can – and trust me they want to. Columbus is very fortunate to have a program like this.”

Hill stopped volunteering in 2020 when she moved to Gallipolis to care for her ailing father and grandmother.