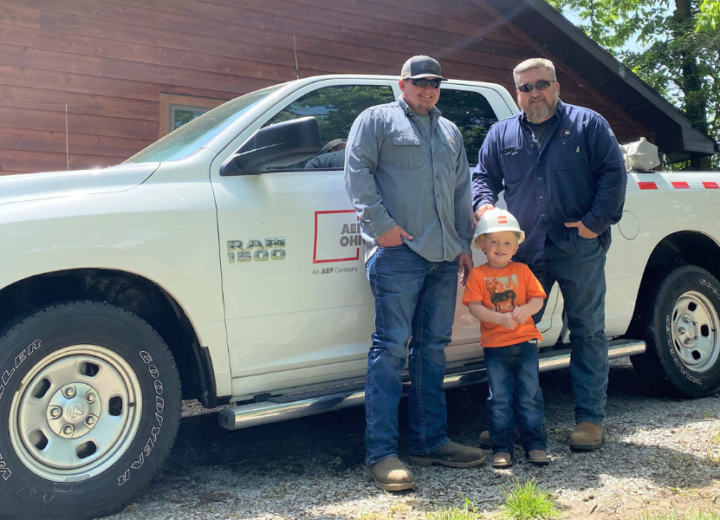 To celebrate Father’s Day, we sat down with local father and son duo Jeff and Austin Dysert to learn more about what it’s like working together and sharing a passion for their work.

Jeff Dysert knew pretty early on that his son Austin was going to get into linework.

“He’s always liked doing everything I like doing. We spend a lot of time together— we hunt, we tinker around with anything with an engine, we have the same hobbies,” Jeff said. “I’ve always enjoyed linework and I know Austin well enough to know he would enjoy it, too.”

Sure enough, Dad was right. Twenty seven years after Austin was born, he and his father now work together at AEP Ohio.

Jeff officially joined AEP Ohio 20 years ago and now works as a distribution system inspector overseeing contract crews working in northwest Ohio; Austin started with AEP Ohio in 2018 and is only one class away from officially completing his lineworking apprenticeship. With Jeff based out of Findlay and Austin in Lima, they almost never cross paths at work, but they still spend plenty of time together “talking shop”while fixing up old cars and golf carts.

“It’s been nice to have someone at home who understands what I’m doing that I can talk to,” Austin said. “Linework is everything I expected and more. It’s a good job to have. When I was a kid, I didn’t know as much as I know now, and I think even more highly of the job now that I’m doing it.”

Jeff led by example — his biggest piece of advice for his son was “work safe.”  When Jeff first entered the profession, it was a little more dangerous without all of the modern safeguards and hyper-focus on safe work procedures.

Austin said Jeff has always been a great dad, and he himself now has a chance to pass on the same lessons: Austin’s son, Bennett, turned three years old last month.

“It would be cool to have three generations in the field. If it’s something he’s interested in, I’ll definitely encourage it,” Austin said.