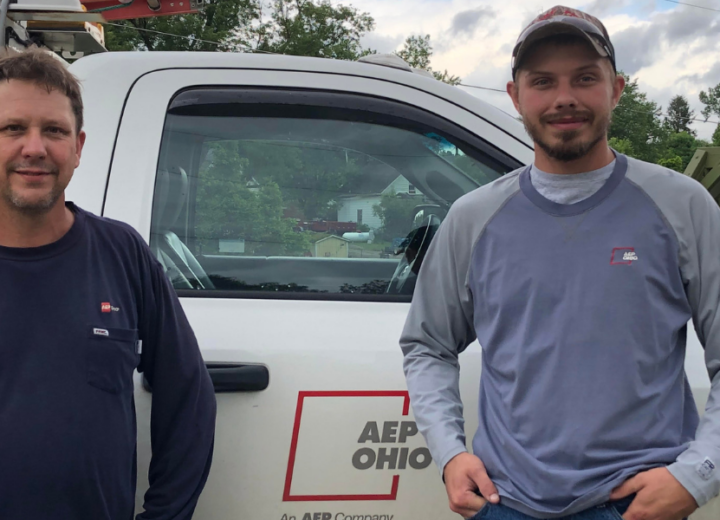 To celebrate Father’s Day, we sat down with local father and son duo Floyd and Casey Ridenour to learn more about what it’s like working together and sharing a passion for linework.

From the time Casey Ridenour was a toddler, he loved the giant toy trucks in his house. Even more so, the lineworker bucket trucks his dad would drive from work to their home in Chester, Ohio.

“I vividly remember when I was really young, my mom called me outside and my dad’s coworker gave me my first dozer ride,” said Casey. “It was so cool.”

That passion for big trucks and watching his busy, hardworking dad return from hours of putting up power lines in the hills of West Virginia resonated for the now 24-year-old AEP Ohio lineworker.

“Casey loved it when I brought the bucket trucks home when I was on call,” said his father, Floyd Ridenour. “He would check them out every time they were parked in the driveway. When he was older, he attended college and worked as an electrician, but decided he really wanted to do linework.”

Floyd Ridenour is an AEP Ohio line crew supervisor for the Pomeroy service center, now celebrating 14 years with the company. He learned the trade when he served in the U.S. Air Force and then settled down in Chester with his wife, Jeanie, and three children. His son is now in his fourth year working for AEP Ohio, based out of nearby Athens. Casey lives with his wife, Diane, just a short drive from his dad.

“When I was first hired on, of course I was nervous,” Casey said. “You’re around people that your dad knows. We sound a lot alike, so when one of us spoke they’d try to figure out which one of us it was.”

“It took them a lot of time,” he added with a laugh.

The two have only worked together a couple times, recalling the time they both were called out to restore power to a home where a pole had fallen nearby. They were there for nearly nine hours together, on a holiday.

On this month where fathers are celebrated everywhere, the Ridenours both recognize the uniqueness of sharing a career choice as father and son, as well as the benefits. Floyd says he certainly knows how to turn wrench, but Casey helps him with some of the new technology. For Casey, he says his dad is still someone he calls overnight while on a service run if he has a question.

“The advice I tell Casey is to listen,” Floyd said. “Don’t say you know how to do something if you don’t. Working at AEP Ohio, his and everyone’s safety is first and foremost.”

When Casey was asked what he’d want to say to his dad on Father’s Day, he thanked his dad for teaching him, and passing along his knowledge. Before he got a word out, though, Floyd interrupted with a quick quip.

One response to “Father and Son Share Love of Linework”