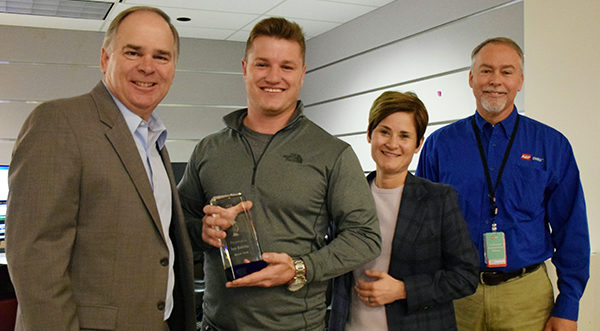 Two people were killed in a car crash in March 2018 on Interstate 270 in Columbus. That number may have been higher were it not for the quick response of Ian Koblitz.

Koblitz, a distribution dispatcher for AEP Ohio at the Groveport Operations Center, was one of the first people on the scene after an eastbound car struck a barrier. The car was on fire, and several passengers were still inside, non-responsive.

An Air Force veteran, Koblitz used his military training to act swiftly and take control of the situation. First, he instructed another driver to grab his fire extinguisher and put out the blaze. Next, he checked the conditions of the driver and the front-seat passenger. (He felt no pulses.) That’s when he heard the whimpers of an 18-month-old girl, who was trapped under her mother in the back seat.

With the help of other Good Samaritans, Koblitz was able to remove both the baby and the injured woman through the back window of the still-smoldering car, saving their lives.

“It’s just an amazing display of selflessness. Events like this happen not only because of the experience that our employees have, but because we care about the communities we serve,” Akins said. “When we come upon these kind of situations, it takes a special person to respond and ensure that the lives of others are safe.”

Fellow employees at the Distribution Dispatching Center talk about Koblitz’s high-energy, lighthearted personality. But that fails to paint the full picture.

“Most people think of Ian as a jokester and someone who only lives to have fun, but those who know him well and are close to him understand how much he cares and how well be performs his job,” said Randy Knight, distribution dispatching manager. “Ian is very conscientious and is an excellent trouble dispatcher. He willingly goes out of his way to help others whenever possible.”

Koblitz says his military service prepared him for the fact that bad things can happen on any given day, and you have to be ready.

“After my deployment, seeing something like that was less of a shock. I saw stuff other people don’t have to,” he said. “But you learn you have to get your stuff together. You’re given the tools to do what you can. You just have to keep a calm head and be present in the situation.”

Though Koblitz appreciates the award, he’s also uncomfortable with the recognition.

“It’s a little awkward to be honest. I just did what I was supposed to do – what anyone else would do,” he said. “I believe that God put me on that road at that time. He put me there to help. I was his tool in that situation.

“I wish everyone could have made it out OK, but at least two people were saved.”