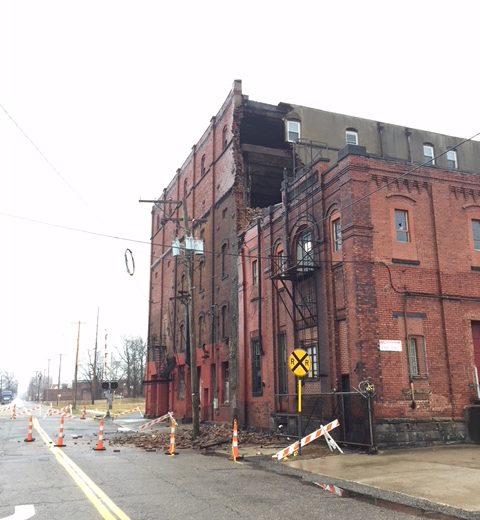 Employees in Canton received a glowing thank you note from the Refuge of Hope, an organization that helps homeless men in Stark County. The reason for the letter? AEP Ohio did the right thing in a tough situation.

A brick building in downtown Canton started falling unexpectedly and was determined to be structurally unsafe. The entire building needed to be demolished and AEP Ohio had to take down power lines for the demolition vehicles to access the site. Power would have to be cut; as a result, the Refuge of Hope would lose its electrical service for at least a week (and maybe longer).

Local AEP Ohio leaders discussed options and quickly agreed: something needed to be done to keep the homeless shelter operational.

Planning was difficult and logistically there was a lot to sort out. Distribution Line Coordinator Senior Terry Cable was one of the first employees on the scene and reassured the customer early in the process. Rich Tharp, distribution system supervisor at Canton South Service Center, took the lead on working with city officials, organizing all construction and ensuring safety standards. And Jina Duplain, a Community & Customer Experience account manager, kept in direct contact with employees at the shelter to ensure they always knew what was happening.

AEP Ohio took steps to help ensure a portable generator kept power flowing for three weeks, an uncommonly long time. Thanks to hard work, open-mindedness and commitment to doing the right thing, the Canton team achieved its goal: keeping the Refuge of Hope open for those who needed food, water and shelter.

“Because of you, we were able to continue serving those who live on the margins of society in our community and who depend on the services we provide 365 days a week, 24 hours a day, seven days a week,” wrote Duane Wykoff, chief executive officer at the Refuge of Hope. “Let me say we are greatly blessed to the recipients of such kindness and generosity. Thanks to AEP, we were able to provide for the less fortunate without interruption during what could have been a crisis for so many who have so little.”