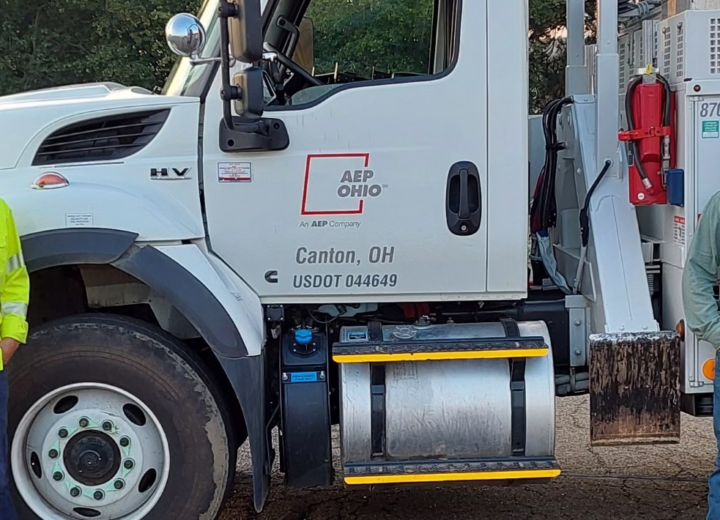 Copper theft is a costly crime, it threatens our service reliability and, most importantly, it can be incredibly dangerous. Lineworker Cody Lambert and Line Crew Supervisor Brant Phillips are being applauded by their peers at AEP Ohio for recently spotting a hazardous situation in Canton.

Lambert and Phillips had pulled safely to the side of the road to eat their lunch. When they stopped they looked across the street and saw the doors of a meter cabinet swung wide open. Upon further inspection they discovered a thief had snipped out four copper wire conductors from inside the cabinet and weatherhead – while the equipment was still energized.

“He could have been electrocuted, or at least a serious arc flash could have occurred,” Phillips said.

The equipment fed power into a Dollar General Store inside a shopping plaza. A call to the plaza owner revealed that the thief may have struck the plaza the month before, possibly because of the rising price of copper and other metals.

Lambert and Phillips notified the police as well as AEP Ohio’s meter department. Repairs were made – the doors had to be replaced because they were so badly damaged – and tamper-proof locks were installed.

The unsafe situation could have been worse.

“By leaving the doors open the thief created a real hazard. Any kid walking by could have poked around in there,” Phillips said. “I don’t know how long it was like that. I’m glad we caught it when we did.”

Of course, closed cabinet doors wouldn’t have been good either. With the additional wires gone, the equipment had the potential to overheat and pose a fire hazard. That also means the issue would have been harder to identify until a worker came to physically examine it. With copper theft continuing to be an issue across our service territory, it’s yet another reason to remain vigilant.