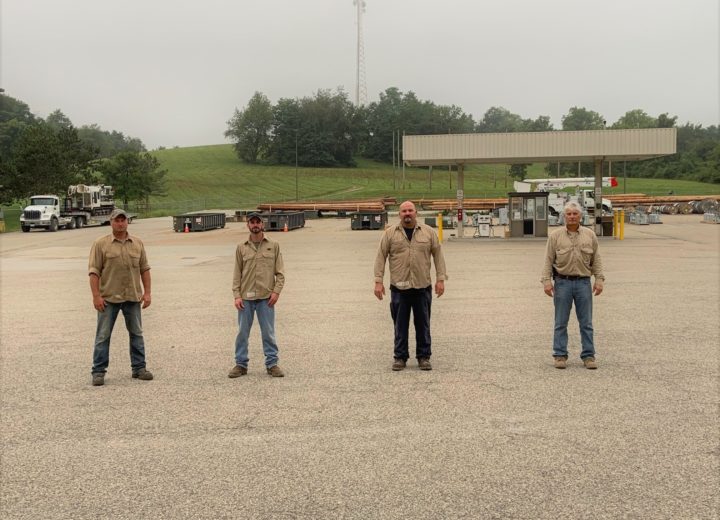 Called out for storm duty on Friday, Aug. 13, a Belmont line crew had just hit the road and had a long night ahead of them.

That didn’t stop them from helping someone in need.

About 200 customers were without power in the Belmont area following a storm, and nine lineworkers were gearing up to tackle 12 outage tickets. Line Crew Supervisor Mike Kandrach headed out with Greg Ware, Frank King and Kevin Levi along Route 331 when they were quickly passed by a group of speeding police cars. It didn’t take the linemen long to see where they were headed: a car had careened off a curve along the slick road and fire and emergency medical vehicles had already shut the road off to passing traffic.

Kandrach got out to investigate. Nearby AEP utility poles were intact but the vehicle was severely damaged. The two passengers were injured – one bleeding badly from his face – and emergency personnel were doing their best to load the victims onto stretchers and transport them up the embankment. It was a steep, rain-slicked slope and hoisting heavy weight up the hillside wasn’t easy.

The line crew immediately volunteered to help; jointly, the eight or so responders were able to slowly lift the stretcher up the hill hand by hand until the men were safe, loaded into the ambulance and taken to the hospital.

It was the first job of many for the Belmont crew, who ended up working throughout the night to restore power following the storm.

“I know we had customers waiting on us but I wouldn’t have done anything differently,” Kandrach said. “We’d be willing to help again in a heartbeat.”

For those who work closely with the Belmont team, including Distribution System Supervisor Jim Jones (“it’s an honor to work with these guys”) and Craig Griffith, manager, Newark distribution system, the crew’s behavior is par for the course.

“It’s not surprising that they assisted like they did,” Griffith said. “It’s truly who they are.”