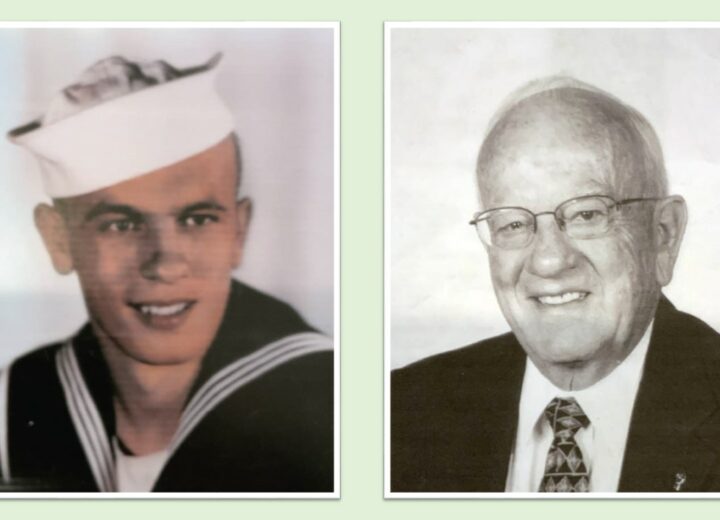 Elden Hudson, a U.S. Navy radio operator and 43-year employee of AEP Ohio, was inducted into the Muskingum County Veterans Hall of Fame on Saturday, November 12.

Elden, 96, served with the Navy near the end of World War II from 1944-1946. Born and raised in Coshocton, Ohio, he never saw combat and returned home following the war only a couple years out of high school. He was reading meters for the gas company and also caddying at the Coshocton Country Club when one of its members offered him a sales job with Ohio Power (which would later become AEP Ohio).

Elden went on to spend 43 years with the company and retired in 1989. He worked in various roles – spending time in Canton, Dennison, Minerva and Bucyrus, among others, and serving 16 years as division manager in Zanesville. He also served four annual terms on the AEP Company Board of Directors and was president of Ohio Power Co. State Veterans Association.

“In those 43 years, the company grew and I grew, too. I got married and had three children,” Elden said. “I don’t know of a better company I could have been with. There were a lot of opportunities, I was treated very well, I was able to support my family and I was set up nicely to live my retirement, which I’m doing right now.”

The Muskingum County Veterans Hall of Fame honors inductees not for their military service but for their longstanding community involvement. In his customer-focused role at AEP Ohio, Elden was very active in the communities he served, with decades of volunteerism and charitable work. Organizations in which he was involved – at local, state and sometimes national levels – include the American Cancer Society, United Way, Chamber of Commerce, Zanesville City Schools, Boy Scouts of America and many others. Elden also proudly reports a 65-year perfect attendance record as a member of the Rotary Club.