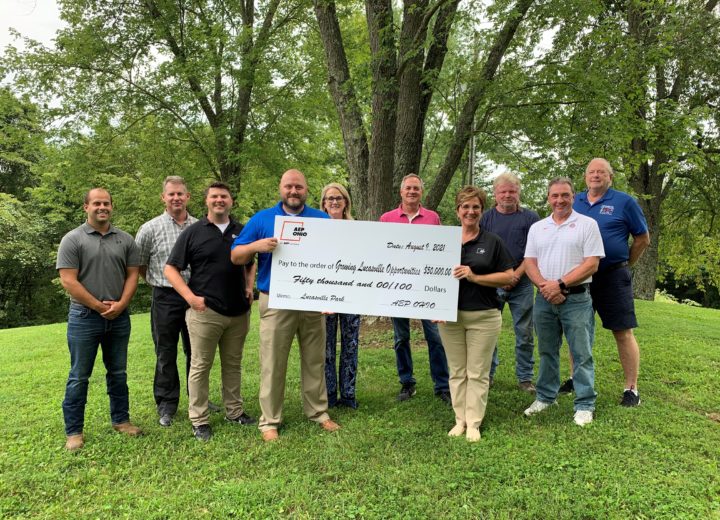 Lucasville is one of the few communities in southern Ohio without a park. With some help from AEP Ohio, that will soon change.

AEP Ohio has donated $50,000 to Growing Lucasville Opportunities (GLO) – $25,000 this year and $25,000 next year – to help build a park on Robert Lucas Road about two miles from AEP Ohio’s local service center. GLO has put together a four-phase $700,000 plan for the construction of the park, which is part of a larger effort to bring more economic and community development to the area.

A primary feature of the park will be the construction of a large amphitheater situated on the site’s hillside. Complete with a sound stage, speakers and benched seating, the open-air amphitheater (ideal as we continue to navigate the challenges of COVID) will be a destination for school field trips, concerts and a practice area for high school drama, choir and band groups.

Engineering and topographical surveys of the site are wrapping up now. Groundbreaking is planned for the spring, with full completion of the first phase expected in late 2022.

Additional phases of the project include the construction of a neighboring picnic shelter (the amphitheater’s stage will be viewable from the gazebo), a quarter-mile paved walking path (with access to a nature trail, day camp and picnic area on the 20-acre public grounds) and a playground (one area will be for young children and another for older, bigger kids).

The initial schedule called for about four years of planning and construction; however, with local interest and investment on the rise, project planners say the park could be up and running much sooner.

“AEP Ohio gave us a tremendous kick-start with their support for the project,” said Ken Boldman, a retired AEP Ohio customer service supervisor and a member of the GLO governing committee. “The company has been an important part of the revitalization effort in Lucasville.”

Boldman says the Portsmouth highway bypass built in 2017 is one of the factors driving economic and business development in the area. While bypass plans were still under review, AEP Ohio decided to place its stake the community pre-emptively, purchasing land for a new brand service center in 2012 and relocating its Portsmouth distribution facility in 2017.

Lucasville community leaders saw the growth of nearby communities such as Portsmouth – fueled by the passion of local volunteers and the creation of 501(c)(3) organizations to push for change – and decided Lucasville could do the very same thing. With the help of companies such as AEP Ohio, that change is on its way.

“A lot of new businesses are coming in and there’s enthusiasm to see some growth,” Boldman said. “This park will be the biggest thing our group has done yet, and we hope to do more. There’s a lot of optimism in the community. It’s all good stuff.”