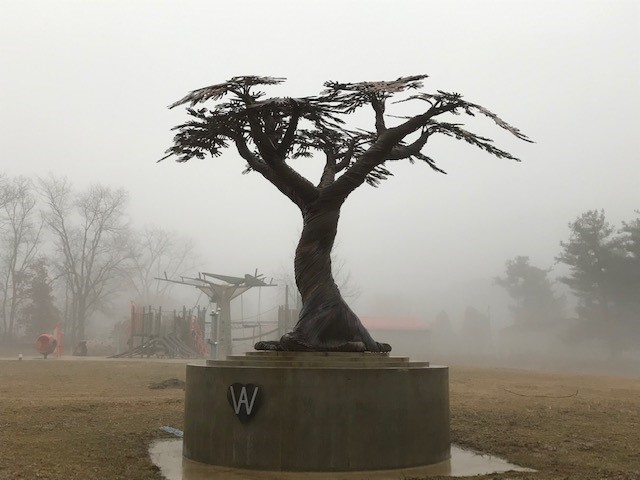 Legacy Community Park is a big project inspired by a little boy. Wyatt Adkins was born in December 2008 with a rare congenital heart defect known as hypoplastic left heart syndrome. He had open-heart surgery at six months old. Though the prognosis for the procedure was positive, Wyatt went into cardiac arrest during the procedure and died.

The Village of Hanover and Licking Valley (a few miles east of Newark) has rallied behind the Adkins family since Wyatt’s death. His parents, Beth and Shane, started the Wyatt Adkins Heart Organization with the primary purpose of building a playground in his memory.

Ten years later that dream has finally become reality – in an even bigger way than they originally planned. The organization has raised more than $1.5 million to fund Legacy Park, a 15-acre community space that includes not only a playground (complete with plenty of climbing equipment plus musical and sensory installments) but an all-purpose field for football, lacrosse or soccer; four baseball and softball diamonds; two sand volleyball courts; and (coming soon) a 24-hour library for checking out books.

AEP Ohio was part of the community effort to build Legacy Park. The Customer Design team helped plan the site’s electric service and linemen erected the poles and lights that illuminate the ballfields. Much of the work was done at no or little cost thanks to the AEP Ohio Promise initiative.

The centerpiece of the playground is a towering tree sculpture by a local metal artist. The leaves of the tree are laser-cut digitized handprints from 968 Licking Valley elementary students. Also on the tree is a plaque commemorating the individuals and businesses who played a pivotal role in building the park – including AEP Ohio.

“Beth and Shane are longtime residents of Hanover. They’re good people. We were happy to help them out,” said Craig Griffith, manager distribution systems, Newark. “It’s a sad story but something really good has come out of it. I’m just so proud that AEP Ohio was able to be involved.”